Typography 101: How to Choose the Fonts for your Brand 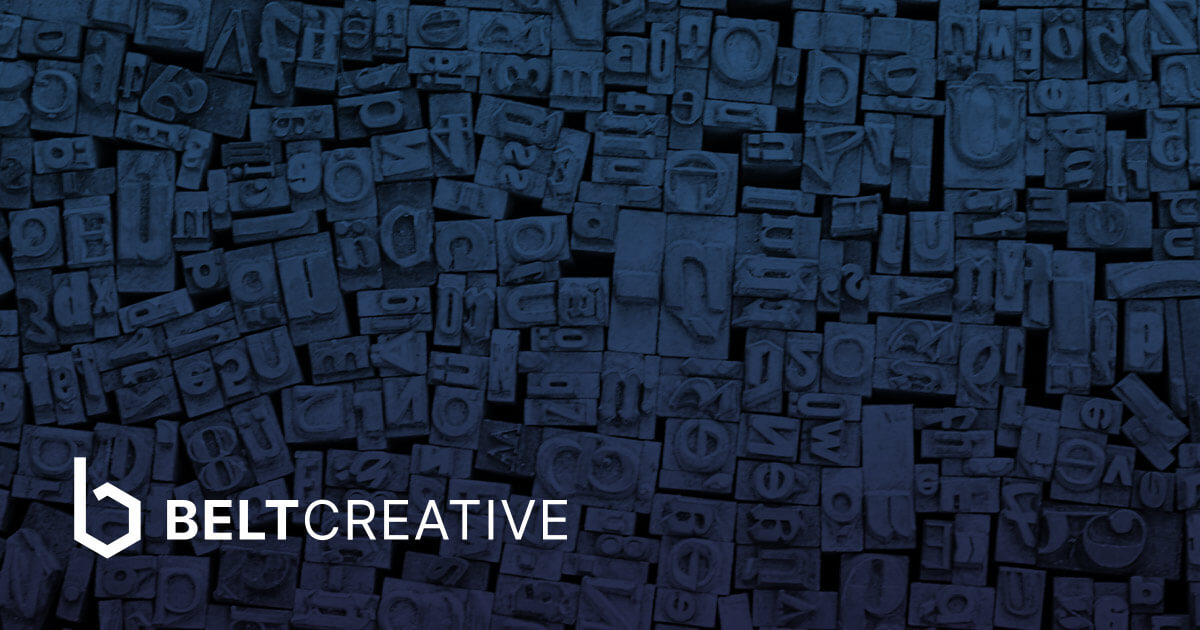 Fonts. There are so many in every style imaginable, and they can leave a strong impression on people. Typography is more than an accompaniment to your brand. It can be your brand. And even if your branding is heavy on graphics, all written words need fonts and styling. But there are thousands of fonts available online, and many have a reputation attached to them. How do you choose which ones to use? Let’s talk about that to start.

What makes a font?

You see typography everyday, and everywhere. You’re seeing it right now! But what are the differences between different fonts? And what makes them better for a certain business or use? In this post, we’ll go over the basics of typography so you can feel confident in choosing fonts for your brand. First, let’s go over the styles.

Is it Serif or Sans Serif?

You may have heard of the terms serif and sans serif. Put simply, serif fonts possess ‘feet’ on their letters, while sans serif fonts do not. Serif fonts are also considered to invoke a more traditional look, opposed to the more modern sans serif.

Both are the most commonly used font styles across businesses. They’re legible at large and small scales, and with so many fonts available in both styles, you can almost certainly find one that will work for you. We guarantee that your brand will have either serif or sans serif included in it, at least as your body font.

Scripts are often considered to be tricky to implement into a brand identity. However, like with any other font, you can easily choose one that will complement your business’s image. Scripts are broken down into formal and modern styles. Formal scripts tend to resemble traditional calligraphy, such as Snell Roundhand. Modern scripts on the other hand, are bolder and often intended to emulate handwriting from today’s age. A good example of a modern script is Yellowtail.

Display fonts are the broadest category of fonts, and can range from highly stylized retro fonts, to illegible symbol fonts. Display fonts are not suitable for body copy, but can make a lasting impression when used in logos and to emphasize main headers. However, display fonts must be chosen with care, and tend to complement trendy or modern brands more than others. Below, you can see examples of the fonts Rock Salt and Monoton.

Which Fonts Suit Which Business

Okay, so knowing the styles of fonts is helpful, but how do you choose from them? Many of the same advice for choosing your brand colors applies to choosing your fonts. Depending on your target audience, your products and services, and the feel of your business, your fonts may change.Here are a few tips and guidelines for you. Start by determining where your business falls in the following categories.

Here are some examples of how the different types of fonts can be implemented.

In example A, the main font is a display style, while the subfont is a thin, modern sans serif. You may notice that the display font is highly stylized, unique, and attention grabbing. Because of this, having a simple and light font makes a good contrast.

In example B, the main font is a light, modern script, while the subfont is thick, rounded sans serif. The thickness of the sans serif is important here, because of how thin the script font is by comparison. If one font is thicker, it’s important to balance it out with a thinner font.

It should be noted that, in both examples, the subfonts could be used as the body font in business materials, as long as they are not used in all caps. We’ll talk about when it’s okay to use all caps later.

In example A, the type of fonts in the first logo could be swapped so that the main font is a serif, and the subfont is a sans serif. Serif fonts complement a professional, traditional business practice like law firms better than sans serifs, which tend to look more modern. In all caps, the lettering looks powerful and structured.

In example B, the original fonts could benefit more from being lighter. The main font is too bold. The way it was originally styled screams “HONEY”, which doesn’t mesh with the feel of the logo and the company. Instead of such a bold sans serif, a modern handwriting font was then chosen for the main font. A simple sans serif then makes a good complement as a subfont.

Steps To Choosing Your Fonts

Use this guide as a checklist for choosing all of the fonts for your brand. Don’t worry, it’s simpler than you think.

This will be the font used in your logo, and ideally, also used in main headers or for emphasis. This should be the most impactful font in your brand. We recommend starting with Google Fonts. They have plenty of options, which are free to download on both Windows and Mac systems.

These will be the fonts chosen to complement your main font. Keep in mind that ideally, you should stick to two or three fonts in total for your brand. If your main font is something highly stylized, and will be used sparingly, you can choose a font for headers and one for your body font. Otherwise, two fonts are adequate.

Step 3: Make sure your fonts complement each other

The easiest way to do this is to type a simple pairing of your fonts in any software you have available. Look at them together. Do they balance each other in style and appearance? Do you like the way they look together? If you still need help choosing a partner for your main (or sub) font, there are tools available online that will give you suggestions for good font pairings.

Now that you have your fonts chosen, you need to decide how to style them. But isn’t what we’ve been doing? Not necessarily. Styling means choosing how your fonts are used: whether they’re in all caps, italicized, or bolded. Let’s look into this a little more.

You’ve stylized fonts before, I guarantee it. If you’ve ever bolded, italicized or typed something in all caps, you’ve styled a font. It’s as simple as that. When it comes to your brand, it’s all about doing these same things in a strategic and consistent way.

When it comes to stylizing fonts, the most common treatment is to bold them. This can be done for headers, especially if you have multiple headers of different sizes and you need to differentiate one from another. For example:

Some fonts even come loaded with weights. These are preset levels of boldness that can range anywhere from thin to black. This is the most convenient and easy way to make one font look like several. Take the font Poppins as an example.

Although less common in professional applications, it is possible to use italics in your branding. This can be done to emphasize small text or other short blocks of information, such as details under a pricing item.

You may have heard to stay away from all caps, because it can symbolize yelling. But we’ve used all caps in the above examples. So when is it acceptable? There is only one hard and fast rule: never use it in your body font, or for large portions of text. If the text is longer than one small sentence, it should not be in all caps.

For headers, logos and even taglines, all capitals can be perfectly acceptable. If you do use all caps on your headers, try to use them for shorter headlines. It should be mentioned that some fonts are designed in all caps, and therefore, cannot have sentence-case. If this is the case, this font should be used as either your main font, or a font used only for emphasis.

Everyone has fonts that they don’t like, but these next fonts have developed a bad reputation. Although there are many other choices that have been included on lists of terrible fonts, the following have shown up time and time again. Unprofessional and widely viewed as just plain terrible, they are not recommended for use in branding or business materials.

Deserving of the number one spot, it’s the infamous Comic Sans. With an unprofessional and childish appearance, this font should not be used in company branding. Even comic book companies don’t use it in their branding...only in their comics.

Viewed by some to be the second worst font available, and most infamously known for its use in James Cameron’s Avatar, where it received massive negative backlash. Papyrus may only be appropriate at a child’s Egyptian-themed birthday party.

Much like comic sans, Hobo has a childish appearance. Many companies use this to invoke a fun feeling to relate to children or as a retro 1960s font, but there are better options to choose from. Remember, you never have to sacrifice professionalism, even if your business is a daycare.

Often used for veteran charities or construction companies, Stencil is another font that was not designed with professional use in mind. There are other options you can use for a military or architectural feel, such as a bold sans serif or a rugged display font.

Although less offensive than some of the other fonts on this list, Times New Roman (and Times) makes the list for a different reason. It’s just plain boring.

Much like Times New Roman, Calibri is too plain for professional branding. And in a world of thousands of sans serif fonts, it’s easy to choose a better alternative, such as Helvetica.

So Go Ahead, Be Wordy

It may seem like there’s a lot of rules in typography, but once you’ve dived in, you’ll see that it all comes down to viewing fonts from a professional perspective. Much like with other aspects of your brand, you shouldn’t necessarily jump right to choosing your favorite font without objectively asking yourself if it fits the image of your company. However, that doesn’t mean that you must sacrifice style for professionalism. Balance is key!

Team up with a strategic branding design agency.

If you need help with any other part of setting up your brand, check out our other branding blog posts or our branding design services, so that we can help you grow your business to its peak potential. Or, if you’re ready to dive into the next step, whether that’sor designing a new website, we can help with that too.

If you buy something through this post, Belt Creative may get a share of the sale. For more information, please read our disclaimer.
Table of Contents
Text Link
Related posts
What is inbound marketing?
Common Website Design Mistakes that Destroy Your Conversions
How Long Does SEO Take to Show Results?
Subscribe for monthly website tips and resources.
Thanks! You're on the list.
Oops! Something went wrong while submitting the form.

Have a project in mind?

Fill out our new project form and we'll get right back to you.
Get Started